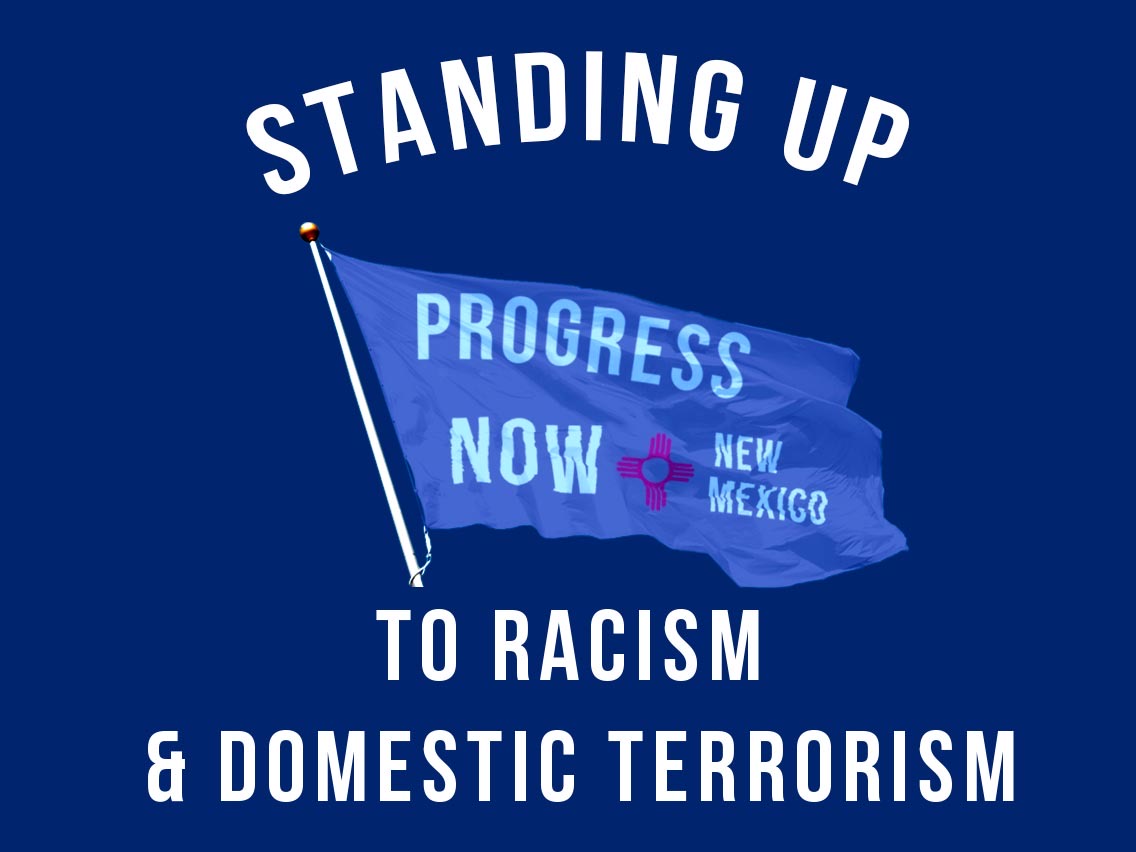 We want to reaffirm to you our commitment to calling out racism, systemic oppression of our communities, and right wing extremists. Period.

We want to reaffirm to you our commitment to calling out racism, systemic oppression of our communities, and right wing extremists. Period. Our families’ lives depend on it. We will not be intimidated into doing otherwise by anyone from the extreme right or from folx we still consider friends. That’s not who we are.

By RUSSELL CONTRERAS, Associated Press ALBUQUERQUE, N.M. (AP) – A New Mexico GOP state lawmaker and congressional candidate failed to disclose that her real estate company earned nearly a half-million dollars in contracts with two state agencies over five years, according to an analysis of campaign finance disclosure records by The Associated Press.

Yvette Herrell voted AGAINST increasing the penalty for intentional abuse of a child:

Where did that bill go? The fate of key legislation

Yvette Herrell voted AGAINST free breakfast in elementary schools when 85% or more kids are eligible for free or reduced lunch:

Yvette Herrell voted to RESTRICT access to our streams: https://www.abqjournal.com/564540/gov-martinez-signs-bill-into-law-restricting-nm-stream-access.html

Yvette Herrell has voted multiple times to keep hard-earned dollars out of the pockets of working families:

On a straight party-line vote, a House committee on Monday voted down two bills that would have raised the state minimum wage to $10.10 an hour. While Democrats on the House Regulatory and Public Affairs Committee said that House Bill 20 and HB 138 would help raise thousands of New Mexicans out of poverty, Republicans said they were afraid the wage increase would hurt businesses.

This week, Joe Biden and Donald Trump faced off in the first presidential debate for the 2020 election. The most telling moment of the debate was when the moderator Chris Wallace asked Trump to condemn white supremacist and militia groups. These racist groups have been showing up, often armed with guns, to Black Lives Matter rallies and protests against police violence taking place in cities across the country, including here in New Mexico. Trump not only refused to condemn white supremacists, but he also CALLED THEM TO ACTION. Here’s the exchange:

Unsurprisingly, Trump pivoted away from the question, taking zero responsibility for his role in the continuing rise of white supremacy and projecting the problem onto others.

Representative to New Mexico’s second congressional district, Xochitl Torres Small (NM-D) went head-to-head in a socially-distanced debate with her Republican challenger Yvette Herrell on Sunday afternoon in a televised debate held by KOAT News and the Albuquerque Journal. Torres Small was confident, and thorough, and gave voters insight into her life, family, and her New Mexico roots. Early on, she put in context her understanding of New Mexico’s schools by talking about her own NM public school education and her family’s public services in education and the Las Cruces Police Department. Herrell, on the other hand, was nervous—from verbally stumbling, and nervously consulting her notes she primarily focused on “small business” no matter what the question. This is pretty much what one would expect from Herrell, who likes to talk about freeing up small business from taxes and regulation and failed to report a half a million dollars in real estate business income on state financial disclosures.

So it comes as no surprise that Trump, who has endorsed Herrell, withheld his tax returns from the public, evaded taxes on his holdings for DECADES, and has piles of debt that’s coming due soon as reported in the New York Times bombshell on Sunday.

Hold onto your butts, this is a long one folx!

It’s known that when a champion of human rights dies, we mourn today and organize tomorrow. Well, tomorrow has come. Now, more than ever, is the right time to organize. With the past four years (feels like way more, we know) under the Trump presidency, every day holds a new, angering, decision made against BIPOC folx everywhere. While rulings oftentimes were halted by the Supreme Court for unconstitutional efforts, Ruth Bader Ginsburg was one to thank.

Pearce Distracts to Save His Sinking Ship

The Republican acts of desperation have begun and Republican Party Chairman Steve Pearce is acting as Trump’s clean-up crew for the November election. After Trump’s latest embarrassment in being outed for hiding the severity of COVID from the public, perhaps Pearce decided his party has nothing to stand on- so naturally, he tried to find a distraction to save his sinking ship. Either Pearce has been living under a rock or he’s trying to repackage old news. Just yesterday, Steve, and Candidate for House District 47 Raye Byford, decided to distract the public, with information we already knew, and had the gall to make a request of resignation of Speaker Egolf. Yes, Speaker Egolf was subject to a tax lien… that was resolved… and reported on months ago… way to go, Steve.

Show Up for Black and Brown Kids

TW: racism, murder, police brutality, family separation, sexual assault and abuse. Amid this week’s wave of protests across the country for Black Lives Matter, we’re left remembering the anniversaries of Emmett Till’s and Elijah McClain’s deaths, both falling in the same week. These weekly traumas from systemic failures that are carried out by law enforcement groups blatantly show us — they don’t care about Black and Brown youth. The question isn’t only “how do we handle this?” but it’s also “how do our kids cope, let alone understand, this?”

As it is, POC folx are predisposed to many health issues, including intergenerational trauma. But to even begin to heal, we must become aware of our history to understand our current systems of oppression.

Establishment GOP and NMOGA are still arguing about the oil and gas industry’s role in the state; meanwhile, the state has moved on.

A weeks-long battle continues to spill over into public spheres as Steve Pearce uses his seat as the Chair of the state Republican Party to hammer away at the New Mexico Oil and Gas Association, specifically their Executive Director Ryan Flynn. The gist of the argument is that Flynn is doing exactly what he said he was going to do in 2017 by making his organization a relevant political force in the state politically and Pearce doesn’t like having competition.

ProgressNow New Mexico has written extensively about Flynn’s statements and actions over the last few years and how scary it is for anyone who cares about actual democracy to see NMOGA and the companies they represent weighing in so heavily when it comes to state politics. It’s nothing new, but it’s just so blatant and out in the open now, as well as being paired with dangerous far-right ideology via the Trump-campaign machine via Power the Future and Harris Media running their social media.

So on the surface, Pearce is right (gag) about NMOGA being so overtly political, but of course, we know Pearce is deeply tied to oil and gas both personally and professionally as well and that under his leadership the NM GOP has also become an utter cesspool of racist and jingoistic characters like Couy Griffin and Rep. Greg Nibert.

The funniest thing about this argument at its core, however, is how utterly futile and useless it is. Oil and gas is on its way out in New Mexico and everyone seems to know it but them. That includes many of the industry giants that are members of NMOGA and use their wealth to dominate politics in New Mexico.

Companies like BP and Chevron, amongst others, are increasingly making investments in the renewable energy sector both for their own operations and for their investors.

This past weekend, unemployed former Congressman Steve Pearce, chair of the deeply racist New Mexico Republican Party, threw stones at the glass house of his sugar daddy, the New Mexico Oil and Gas Association (NMOGA). In all fairness, he wasn’t wrong about a lot of what he accused them of, but it certainly was amusing to see someone who’s whole career has been saturated in oil money yelling about the people who spend oil money with wild abandon. We lol’d.

Pearce, along with Rep. Jim Townsend of Artesia and Sen. Stuart Ingle of Portales, penned their missive to accuse specifically NMOGA’s President Ryan Flynn of making “false statements about the status of the industry and distorting the policy positions and actual votes on key legislation by our elected officials that impacts the industry’s future in New Mexico.” Um, damn Steve, that’s what we’ve been saying.

All this stems from former “Democrat” Harry Teague’s endorsement of Republican Yvette Herrell for New Mexico’s second Congressional district (yes, the same one that Pearce vacated to try and fail spectacularly at running for governor). In the AP article about the endorsement, Flynn was quoted as saying “Throughout her first term in Congress, she (Rep. Xochitl Torres Small) has been a strong advocate for our state’s energy interests and responsible production and has stood up to those in her party who want to completely ban fracking.”

Obvs we’re not stoked about that being true, but it is interesting to see Pearce get so ticked off that his oil buddies are happy working with his replacement. Pearce also claims that NMOGA has given too rosy of a picture of the future of the oil and gas industry’s recovery in New Mexico, trying to push his party’s line that the only cure for the state is full austerity like that instituted in Greece.

If you find yourself in El Paso, driving down I-10 from either direction, you can’t miss it—a 30-foot tall golden obelisk called the “Grand Candela” standing in the Walmart parking lot memorializing last years’ tragedy on the border. 23 lives lost. Children as young as 2 months old, to older folx, some of whom walked over from Ciudad Juarez for their weekly grocery shopping. No one ever saw it coming. Even with an entire year’s passing, it weighs on our hearts.

Blackness and Justice: The birth, need, and rise of intersectional movements

This series on Black Life, and racial justice is barely scratching the surface. A few resources for you to begin your own inner work are linked throughout this piece, and the hope is you continue to educate yourself. As this is a foundational way to eradicate Anti-Blackness, and racism. Let’s get into it:

From Columbus statues being torn down, along with other monuments that crystalize and celebrate the dehumanizing beginnings of our nation, it’s taken some time to collectively confront the deeply problematic history. Many BIPOC have had to celebrate their heroes beyond the one page granted to their culture and history as taught in school and the history books.

We want to reaffirm to you our commitment to calling out racism, systemic oppression of our communities, and right wing extremists. Period.